In human history, there has never been such an elves, who can know human behavior well. Behind these products, such as mobile phones, watches, weight scales, and wearable devices, there are humble smart particles that can identify people's behavior in all days and spaces, and record consumer habits and logical connotations in an all-round way. This is an invisible elf, but dominates the human-computer interaction interface.

This smart particle is a MEMS micro-electromechanical system, which can be regarded as a smart sensor, profoundly changing the interaction between humans and nature. What is so refreshing about MEMS is that it brings the first sensor beyond human senses. This mystery is hidden in the smartphone. As early as 2012, the iPhone 5 used 4 MEMS sensors. The Samsung Galaxy S4 phone even uses eight MEMS sensors. Nowadays, it is common for high-end smart phones to use dozens of MEMS devices. The true wireless headset TWS, which has become more and more popular in the past five years, is behind the contribution of MEMS.

And the arena of suppliers in this field is basically calm. Thirty companies can account for 90% of overall sales. They are basically old faces on the list, but they have a clear stamp of the times.

Global MEMS revenue will reach a market of more than 100 billion yuan in 2020. The three big shots carve up everything. Consumer electronics took 60%, automotive electronics 20% and industry accounted for 10%. The remaining 10% is divided among the medical and military industries. 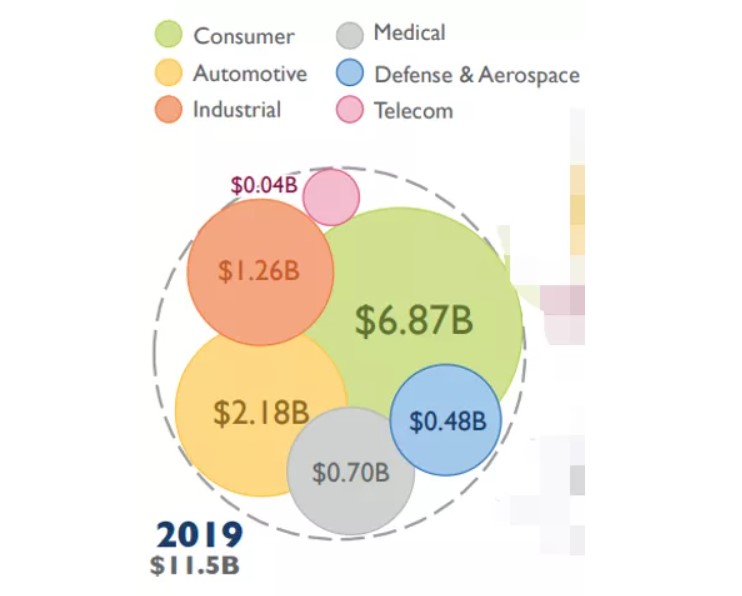 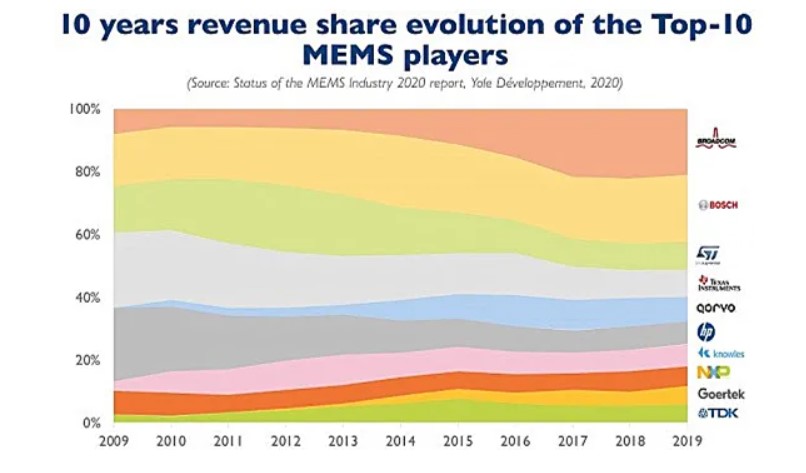 To understand this industry, you can look at who is the king ten years ago and now. HP has gone from the first to the back, and Broadcom has emerged. This subtext is meaningful, that is, the era of desktop computers, a full turn to the mobile Internet. Sales of printers have fallen, while the MEMS sensors required for inkjet printers have continued to decline, while the radio frequency sensors of smartphones have been rapidly amplified. This makes it difficult for suppliers such as Broadcom not to make money.

Overall, this is a boring arena. There are not many surprises. The chip industry is all pointing towards great integration. But MEMS sensor is an alternative, it refuses to choose the form of oligopoly, but maintains a situation of multiple competition. It probably presents a situation where two older brothers lead 30 younger brothers. Broadcom and Bosch are two heroes fighting, each leading the industry with nearly 10 billion yuan in revenue; followed by half, about 5 billion mid-level players down in turn. They are like the keys of a piano, which are arranged continuously and evenly from the high range to the low range. With a revenue of 500 million yuan, it can almost be on the global Top 30 list and get the title of God once.

The MEMS sensor pattern basically follows the footsteps of semiconductors, and the strongest is still the United States, which occupies more than half of the country. Europe is dominated by big-name manufacturers such as Bosch, STMicroelectronics, and NXP, while Japan is unique with its multi-brands. South Korea was unexpectedly absent, while China relied on the microphones of true wireless headsets to occupy two seats.

2. The emergence of Chinese tunes

The sensor is a super short board made in China. What is sad is that this market has not paid enough attention so far. But in all sensor categories, MEMS sensors ushered in China's moment on the local track.

MEMS microphones are the most dazzling star in the past two decades. In 2002, Lou's Electronics mass-produced the first MEMS microphone, which replaced the vibrating membrane with a micro-silicon wafer. Apple started using MEMS microphones on iPhone 4 and iPad 2 in 2010, which became a turning point in the development of this market. With the help of Apple mobile phones and headphones, MEMS microphones have become a stable market. Lou's Electronics took the lead, and China's AAC and Goertek followed closely. Other opportunities were left to Infineon, TDK, NJRC, etc.

Chinese manufacturers have made remarkable breakthroughs in the MEMS field. This is the rise of GoerTek and AAC. GoerTek has benefited from the development trend of voice interfaces beginning to be favored, including microphones for smartphones and wearable devices, and has the potential to compete with Lou's in the global market.

In 2013, Lou's achieved an income of 3 billion yuan, and then it was like being jumped into a magic circle of Monkey King, and it has never been able to jump out again until now. That is, in this year, Lou's Electronics initiated an intellectual property investigation against Goertek, starting with packaging patents; and Goertek also quickly fought back. One year later, the two parties not only shook hands and made peace, but also concluded a further business cooperation relationship. The advantage of China's low-cost manufacturing has proved to be a strong core competitiveness, which is beyond the reach of foreign companies.

AAC and GoerTek have proven the feasibility of catching up with mature market models. In this market of 150 billion true wireless TWS headsets, China's second wave of challengers has begun to enter the market. Both Suzhou Minxin, which was just listed last year, will have revenue of 330 million in 2020, and there is also a cutting-edge force in Fujian Xirenma, which has just launched a new MEMS microphone product in May this year. As a domestic sensor company operating in a vertical manufacturing IDM model, The innovation of this company is worth looking forward to. And General Micro GEMES, which has just completed financing, is also eager to try. The high-end products designed by it will be commissioned to the world's second largest MEMS foundry, Silex of Sweden, which is a rare acquisition in the sensor field in China.

MEMS sensor is destined to be a passive role, and its decisive space cannot be determined by itself. For example, Texas Instruments TI's MEMS sensor is limited to consumer projection applications, which has kept its performance stagnant for many years. It is waiting for the maturity of markets such as radar head-up displays and smart headlights before it can stand up to its former glory. Waiting is the norm.

Even so, MEMS sensor is still a kind of prediction, everything has eyes, and spoils the future. Every move of MEMS manufacturers is like a reference book about future products, heralding various possible intelligent roads.